Linnaeus and Liberty: the Life and Works of John Milton in the Library of Carl Linnaeus

At the heart of the Linnean Society’s collections lies the personal library of Carl Linnaeus (1707-1778), a magnificent assortment of 1,600 books covering the literature of natural history from the 15th century to Linnaeus’ lifetime. As one might expect in the library of a famous naturalist, the collection spans a range of subjects in the biological sciences (including botany, zoology, medicine, and horticulture), as well as more recherché items in related fields from mathematics and geography, to travel and exploration. Less expected are three neat volumes—rather beautifully bound in gilt-decorated calfskin—covering the life and works of one of England’s most famous poets, John Milton (1608-1674). The story of how these distinctly unscientific volumes ended up in Linnaeus’ library helps shine a light on the network of correspondence that fuelled the 18th century Enlightenment, and the eccentric biography of a man who made it his life’s work to foster the cause of liberty.

John Milton is best remembered today for his stentorian epic poem Paradise Lost, depicting—in memorable blank verse—the fall of man and the war in heaven. In his own lifetime, however, Milton was prized as a political thinker, and as a writer of passionately-argued treatises in defense of personal liberty, freedom of speech, and republicanism.

It was these spirited encomia in praise of individual freedom that endeared Milton to Thomas Hollis (1720-1774), the ultimate source of the volumes in Linnaeus’ library. Hollis was an English gentleman who became immensely wealthy through no fewer than three separate inheritances, and later devoted his life to the protection and promotion of English liberty. He achieved this by the somewhat unusual method of distributing worthy political books to learned men and libraries all over Europe (and, from the 1760s onwards, in North America). The works chosen reflected Hollis’s own political philosophy, and included titles by Henry Neville, Philip Sidney, and John Locke. He also commissioned the publication (or re-publication) of several political treatises by Locke, Milton, and John Toland (including a one-volume Life of Milton, which was also sent to Linnaeus). These were mostly published by the Scottish bookseller Andrew Millar, now best remembered as a significant backer of Samuel Johnson’s famous Dictionary of 1755.

To increase the appeal of his sometimes rather earnest choices, Hollis had his volumes luxuriously bound and decorated with libertarian symbols (intricately crafted by the Italian engraver Giovanni Battista Cipriani). These can be clearly seen in the presentation copies sent to Linnaeus, with idiosyncratic gilt-stamped motifs including the liberty cap, or pileus (a garment supposedly worn by freed slaves in the Roman empire); the owl (symbol of Athena, patron of the city of Athens, the spiritual home of democracy); and Herculean clubs (synonymous with righteous strength and fortitude).

Hollis’s presentation copies also contain numerous annotations, and the sometimes lengthy quotation of especially inspiring or improving passages, laboriously copied in the donor’s own hand. A striking engraved frontispiece in the Linnaean copy of Milton’s Works features the figure of Liberty, pileus cap in hand, surrounded by symbols of peace, wisdom, and abundance (branches of the palm and olive trees; the caduceus; and the cornucopia–or horn of plenty–respectively). Beneath, in a manuscript note, a translation from Thucydides: “Felicity is freedom, and Freedom is magnanimity”.

Why did Hollis send these elaborate gifts to Linnaeus, and what sort of reception did they receive? The donation was clearly part of a larger campaign—with Hollis dispatching hundreds of books to recipients across Europe—but the timing of Linnaeus’ gifts may be significant. Like many in England, Hollis had been greatly disturbed by an anti-parliamentary coup in Sweden in 1756, with Queen Louisa Ulrika attempting to overthrow the ruling Rijksdag and reinstate an absolute monarchy. Although ultimately foiled, relations between the royal family and parliament were badly soured, and many observers feared for the future of democracy in Sweden. The appearance of these robustly republican works on Linnaeus’ doorstep in 1761—the very year he was ennobled by King Adolf Frederick—may have been an attempt by Hollis to shore up support for parliamentary government from an increasingly influential and upwardly-mobile scientist and courtier.

Sadly, Linnaeus’s response is hard to discern. No correspondence mentioning Hollis survives in the Linnean Society’s archive, and–aside from their presence in his library–no para-textual evidence exists to suggest Linnaeus subscribed to (or even read) the defenses of republican liberty contained in the Works. It’s tempting to detect a snub, but the truth may be rather more prosaic; a gifted and occasionally poetic writer, Linnaeus was, nonetheless, no linguist. The manuscripts of his that survive in the Linnean Society archive are mostly written in Swedish or a type of neo-Latin. According to Linnaeus’s biographer, Gunnar Broberg, Linnaeus is not thought to have possessed significant English, and so it’s possible these volumes of dense Miltonian prose were beyond the great botanist’s language skills.

There’s a last, curious twist in the tale. It’s well known that when Linnaeus died his widow, Sara Lisa, sold his library and other collections to James Edward Smith (1759-1828), who used them as the nucleus around which his new “Linnean Society” was built. What is less well known is that the collections remained the private property of Smith and his family until surprisingly late, only officially coming into the Society’s possession–by sale–following his death. The sale was affected by Smith’s widow, the formidable Lady Pleasance Smith (1773-1877), who lived very handsomely on the proceeds until her own death at the age of 103.

A few pieces of correspondence, tipped in ahead of Toland’s Life of Milton, suggest that this transferral of ownership was not an entirely orderly one, and indeed the Hollis volumes were almost certainly stragglers that were only reunited with the rest of Linnaeus’ library some time after the original sale. In an undated cover note (assumed to have been written around 1860), Pleasance writes:

“I beg to add another volume to the acceptance of the Linnean Society, too small to be an encumbrance, and too valuable not to be welcome … I have great pleasure in returning it to the library where Milton’s Prose Works are preserved, also sent to Linnaeus by Mr. Th. Hollis.”

Again, the incongruity of these political works in a scientific library may have caused them to be overlooked, miscategorized, and misplaced. It’s a problem that has dogged them into the 21st century; at the beginning of my tenure as librarian in 2019, it was discovered that a fourth Hollis volume–a Sammelband of pamphlets from the Royal Society for the Encouragement of Arts, Manufactures and Commerce–had lain uncatalogued since the implementation of an online catalogue in the early 2000s (an oversight that has now been remedied). 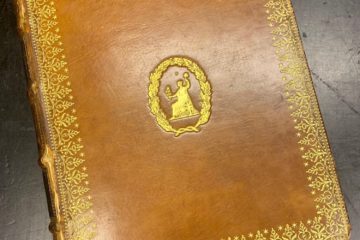 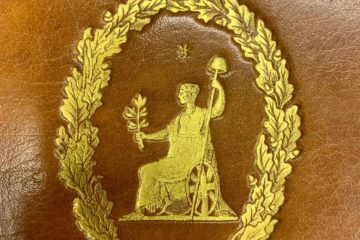 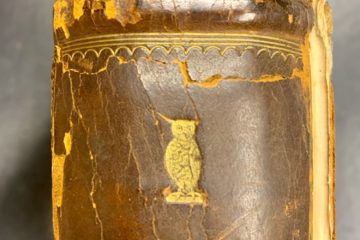 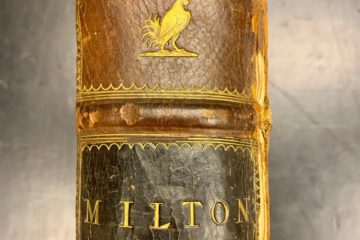 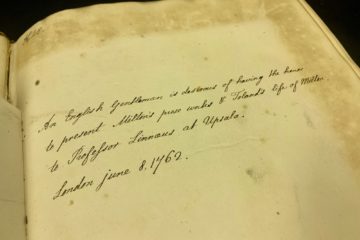 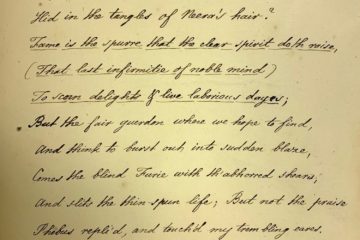 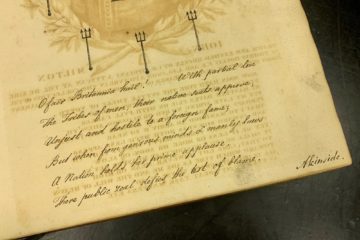 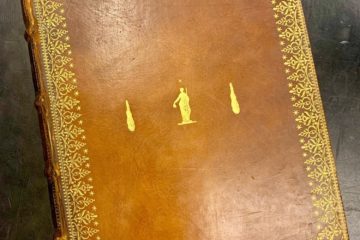 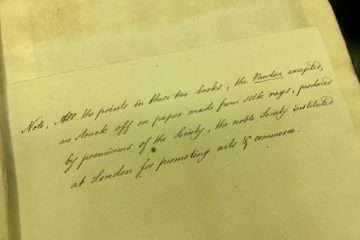 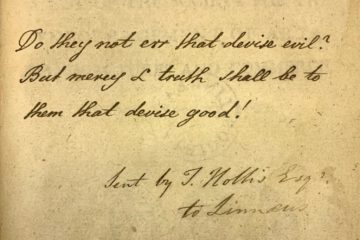 These troublesome volumes seem destined to cause category confusion wherever they go; their radical subject matter, lavish decoration, and unusual provenance setting them apart from the rest of Linnaeus’ library. Still, as a one-time student of English Literature–taking up a post with a scientific society for the first time–I’ll admit I felt comforted by the presence of a familiar name on our shelves, and retain a lingering fondness for these beautiful but eccentric books.

Unless otherwise indicated, all images © the Linnean Society of London, 2022

My greatest debt is to Allen Reddick, whose 2011 piece about Hollis in PuLSe I discovered midway through writing this article. I found it with that unique mixture of horror and delight you experience when discovering that someone has covered a piece of ground before you, and generally done it better. Although we’ve never met, I’m very grateful to Allen for filling in many gaps in my understanding of these intriguing books.

I’m also very grateful to Leonie Berwick for taking the lovely photographs that accompany this article.