Jane and 'The Mummy!': Linnean Links to Gothic Fiction

With the nights drawing in, Leonie Berwick and Janet Ashdown investigate the connection between a reanimated mummy, horticulture and the Linnean Society.

At this spooky time of year, you could be forgiven for indulging in a horror classic or two, like Bram Stoker’s Dracula (1897), or Mary Shelley’s Frankenstein (1818). Perhaps, though, you are less aware of another early hero of gothic fiction, The Mummy! A Tale of the Twenty-Second Century by Jane Webb Loudon (1807–1858). Similarly to Shelley, who was 20 when Frankenstein was published, Loudon (then Jane Webb) was also aged just 20 when her novel was produced.

“The overwhelming supremacy of Man”?

Born out of the need to support herself financially after the death of her parents, The Mummy! was published in 1827 in three volumes, and tells the story of the Pharaoh Cheops, a reanimated Egyptian mummy in England in the year 2126. (‘Cheops’ may also be known to you as Khufu, for whom the Great Pyramid in Giza was built.) One of the first representations of the mummy genre, The Mummy! depicts a futuristic England that is being governed in a state of ‘absolute monarchy’ by Queen Claudia, who gained control after the country had fallen into disorder. (Having become a democracy, it had suffered under the weight of its own arrogance; a place where sense had been “lost beneath a mass of undigested and misapplied knowledge”, and where “all nature was compelled to submit to the overwhelming supremacy of Man” (Loudon 1827).)

The main protagonist is Edric Montagu, a man of noble stock, who, like Victor Frankenstein before him, is possessed “with the malignancy of a demon” by the idea of reanimating a dead body (Loudon 1827).

In the mummy Cheops, Jane Webb Loudon wanted to create something unique. In her introduction to The Mummy! she writes: “Heroes are generally so much alike, so monotonous, so dreadfully insipid.” It’s possible she took inspiration from Frankenstein, as well as the early 19th-century obsession with Egypt, leading to events like ‘mummy-unwrappings’ (which were as odd as they sound). Yet the differences between the two novels are distinct: Victor Frankenstein has no difficulty utilising corpses to form his ‘Creature’, but in contrast Edric Montagu is horrified by the thought of touching a dead body; his confidant Dr Entwerfen almost comically suggests using a well-wrapped mummy instead, stating “thus, if we could succeed in resuscitating Cheops, we need not even touch the body” (Loudon 1827). Additionally, while Shelley’s creation was vilified and consequently became monstrous, Cheops, though initially a figure of fear on account of his appearance, becomes more of a voice of reason in The Mummy!, offering a clear-eyed insight into modern matters, even becoming versed in British politics!

The book is not solely a tale of gothic fiction, however. Jane’s imagined future explores inventions and ideas that are almost prophetic. She writes of automaton surgeons and lawyers, of smokeless cities, steam digging-machines, steam cannons, and even more surprising, “a patent steam coffee-machine, by which coffee was roasted, ground, made, and poured out with an ad libitum of boiling milk and sugar, all in the short space of five minutes” (Loudon 1827). She also writes of a matriarchal society years before Queen Victoria was on the throne.

From mummies to marriage

What does this have to do with the Linnean Society? John Claudius Loudon (1783–1843) was a Scottish horticulturalist, botanist and early Fellow of the Society, elected in February 1806. A prolific writer, he founded the Gardener’s Magazine in 1826—the first to deal solely with horticulture. His interests and resulting work ranged from greenhouse design, to city planning, to agriculture. Much of his garden design work can still be seen today—fittingly, in places like Brompton Cemetery in London.

John Claudius Loudon had read and reviewed The Mummy! for the Gardener’s Magazine. Intrigued by the fantastical elements of the story and the futuristic agricultural inventions (he was fascinated by the idea of a mechanised milking machine), Loudon requested a meeting with the author (Hopkins 2003). It is said that due to the nature of the story, and the fact that it had been published anonymously, he assumed it would be a man, but he met with Jane Webb in 1830 and was soon smitten, proposing shortly after. Sadly Jane Webb Loudon had only one other foray into fiction (Stories of a Bride, 1821), and by her early twenties was assisting her husband with the editing and production of his own botanical publications. Her “cheerful assistance and good common sense contributed something to the tone of his later works” (Simo 1988). The couple had one child, a daughter Agnes, and were friends with many ‘names of the day’ including novelists Charles Dickens, Mrs Gaskell and William Makepeace Thackeray.

Changing the landscape of botanical books

Importantly, Jane would also write several botanically-based books of her own, some meeting with great success. Encouraged by famed horticulturalist John Lindley, and sparked by her involvement working alongside her husband in their garden and on his publications, she decided to produce guides that would benefit the novice horticulturalist, feeling that “books intended for professional gardeners, are seldom suitable to the wants of amateurs” (Loudon 1843). Jane’s books were aimed at “literate women of comparatively limited means keen for advice on everything from soil culture to garden design”, and obviously filled a gap in the market—her Ladies Companion to the Flower Garden (1846) sold 20,000 copies (Bilston 2008). And her Instructions in Gardening for Ladies (1840) would go on to sell a whopping 200,000 copies.

Guides like these were a way for women, at that time pretty much excluded from the academic world, to learn about and utilise the ideas and technology that were bubbling in this era of invention and exploration, even introducing new exotic species to the gardens of their readers.

Jane’s botanical publications were almost like the DIY gardening instruction manuals of their day, making her the ‘Mrs Beeton’ of the world of Victorian gardening. She would also hone her skills in illustration, becoming a reliable botanical artist, illustrating some of her own plates in the process.

Within our library we hold a number of her works:

In The Mummy!, Jane Webb Loudon often paints protagonist Edric as trying to live up to the reputation of his more successful brother, the military general Edmund Montagu (“ambition was his God, and love of glory his strongest passion” (Loudon 1827)). Edric escapes marriage and travels to Egypt where he works to realise his own ambition by reawakening Cheops.

Within the Society’s carpological collections (a collection of seeds, nuts and things that could not have been pressed for preservation) lies a small piece of the outer wrapping of a mummy. We know that the mummy from which it comes was purchased in Egypt by the eccentric traveller Edward Wortley Montagu as a gift for King George III in the late 1700s. Is the similar name to The Mummy!’s ‘hero’ just a coincidence? More than likely. But we can imagine. 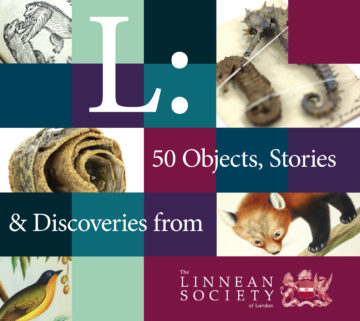 Terrific stories from our carpological collections, and collections in general, can be found in our illustrated book, L: 50 Objects, Stories and Discoveries from the Linnean Society of London, only £12.

Bilston, S. 2008. Queens of the Garden: Victorian Women Gardeners and the Rise of the Gardening Advice Text. Victorian Literature and Culture 36: 1–19.

Loudon, J. 1827. The Mummy! A Tale of the Twenty-Second Century. London: Henry Colburn.