Every year we invite young people to create a new portrait that Carl Linnaeus would really like.

Think deeply about the plants around you and how they affect your life, and illustrate this in a self-portrait.

This year's competition was inspired by the work of John Tyley, a historic artist in the Caribbean - more information on the importance of this acquistion below!

We invited 8-13-year-olds to create a portrait of themselves alongside a plant that is special to them or that lives nearby, inspired by the work of John Tyley.

11-year-old-Emily from Hampshire was awarded First Place for a depiction of themselves covered in ivy surrounded by bees - both of which they confess to love! Our judges felt the design was bold and original, and was a creative interpretation of the shelter and protection offered by plants, as well as a resource for bees. The shading on the ivy leaves is so lovely and the use of blank space is also very good, meaning the image does not compete with itself. A worthy winner!

12-year-old-Adam from Sleaford took Second Place for their quiet and contemplative piece contrasting the magnitude and vibrancy of the tree against the relatively simple form of the person underneath. The shading and colour of the tree is a real stand-out factor in this entry. The judges universally found it to be stunning.

11-year-old-Ayati from Slough was given Third Place for their technically-brilliant execution of a self-portrait. Judges particularly appreciated the use of a muted colour palette, highlighting the verdant foliage taking up the rest of the frame. Many judges remarked on the curious repeated pattern in the background, in-specific enough to be interpreted differently by each viewer, some suggesting woodlands, others suggesting home curtains. This ability to convey meaning through visual choices is a great achievement.

We also celebrated two other runners up, shown below. These were produced skilfully by:

Congratulation to our finalists and all of the artists who participated in the 2021 New Portrait Competition.

We hope to see entries from you later on when we announce the focus of the 2022 Competition. 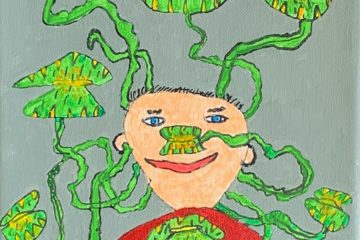 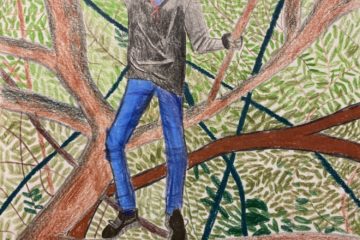 Who was John Tyley?

The Linnean Society recently bought a watercolour painting by John Tyley of a breadfruit tree, shown on this webpage. This painting is special because:

Many historical scientists would choose a plant or object to include in their portraits. These objects would be selected because they were somehow meaningful to the person in the portrait. A clear example of this is Carl Linnaeus - all portraits of Carl include a specific plant, the Linnaea borealis, aka the twin flower. He asked a friend to name the plant after him because he liked it so much, even though it is quite a small and simple plant.

We rely on plants for every aspect of our lives. What plants play an important role in your life, or are meaningful to you?

Carl Linnaeus is famous for his work in taxonomy: the science of identifying, naming and classifying organisms

Create your own Special Species and send them in!

We'll send you a regular newsletter with a round-up of updates from the world of nature education and engagement, including new resources, opportunities that might be relevant to you.