Every year, we invite young people to create a new portrait that Carl Linnaeus would really like. Check out the winners of the past three years of this fun competition.

In 2020, we invited 5-18-year-olds to create a portrait of Carl Linnaeus' furry friend, Sjupp the raccoon.

Carl Linnaeus was given a raccoon by the Crown Prince of Sweden. He called his new friend 'Sjupp' - pronounced 'shoop'. You can watch a video about Sjupp here.

We received entries from young people from countries across the world and gave FOUR first prizes in different age categories. Check out the wonderful winning portraits below.

7-year-old-Emily from Edinburgh created the first wonderful painting of Sjupp. Emily showed a masterful use of her tools, applying impactful shading and use of light, as well as an effective use of bold background colours. You can see the brushstrokes uses on Sjupp's fur which gives the painting dimension and depth. An amazing winner for our youngest category.

11-year-old-Imogen from Cambridge was our second winner. There is so much to love about this artwork. This piece of art creates a wonderful lazy scene that we can all relate to, and that is not even to mention Imogen's fantastic shading and delicate line-work on Sjupp and the tree, while leaving the background relatively untextured, which acts to sharpen the focus on the subject.

12-year-old-Carys from Winchester, Massachusetts produces the third winner which was a real favourite for our judges. One judge said, "I usually prefer to see all of the animal, especially the tail, but this eye catching portrait is so well drawn and it even has the almonds!". Carys has a shown skillful application of shading and reflections to create a really realistic image of Sjupp, and her positioning of Sjupp peering over a ledge to grab some fruit adds depth and playfulness which can be difficult to achieve in portraits.

And finally, congratulations to 15-year-old-Saanvi from Kanpur in India who created this masterful illustration of Sjupp in an eccentric costume, arguably in the style of the director Wes Anderson. Sjupp is positioned dead-center with a soft, natural backdrop, and Sjupp is adorned with intentional details added to clothing, fur and in reflections. We spotted the Linnaeus family crest on Sjupp's breast pocket, which was an excellent touch.

We also crowned a whopping EIGHT other finalists, shown in the gallery below. These were produced skilfully by: 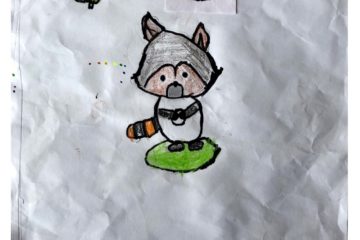 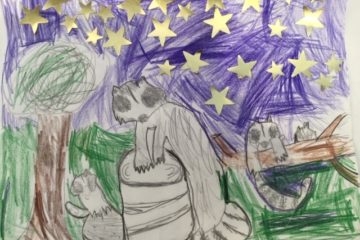 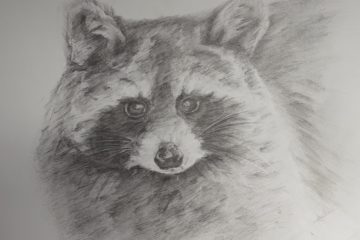 We invited 8-11 year olds to create a new portrait of Carl Linnaeus set in modern times.

Congratulations to Olivia from Lightcliffe CE Primary School who created this wonderful vision of Linnaeus as a woman. The textures within the paint are wonderful, and its definitely eye-catching. We also spotted the different coloured collars on the shirt, reflecting Carl's green-red and black coat of arms. A worthy winner!

Ten year old Olivia wrote a letter to us, saying: "It is designed to be a twist as a female, so I named her Karly Linnaeus. On the colour, I wanted to mix it up a little by doing his eyebrows purple."

We would also like to highlight five other entries which we loved dearly. Well done to Arthur, Benjamin, Mathilde, Noah and Sophie.

We invited 8-11 year olds to create a new 21st Century portrait of Carl Linnaeus to replace our current portrait while it goes away for a while. The winning portrait hung in the centre of our historic Meeting Room for 4 months.

Congratulations to Leo who blew us away with this amazingly detailed and dramatic portrait which truly captures the essence of Linnaeus. We loved the use of colours and shading as well as the inclusion of a variety of species.

We would also like to highlight three other entries which we thought were beyond fantastic. Well done to Heidi, Chun Hoi Lai and Marina.

Our creative videos explore the fascinating world of Carl Linnaeus, taxonomy and whole organism biology. The stories, specimens and objects shared in these videos are entirely unique to The Linnean Society of London.

The Linnaeus at Home Book

Explore the world outside with this activity book for parents